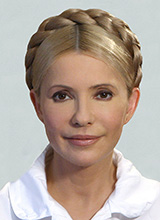 Yulia Tymoshenko is a state and political figure of Ukraine, Prime Minister of Ukraine in February-September 2005 and from December 2007 to March 2010, leader of the All-Ukrainian Association “Batkivshchyna” and the BYuT faction (Block of Yulia Tymoshenko), the second leader after Viktor Yushchenko Orange Revolution 2004 in Ukraine. In the 2010 presidential election, Tymoshenko scored 3% less than the winner. A candidate for the presidency of Ukraine in the early elections of 2014 from the Batkivshchyna party. Then Yulia was in prison for the so-called “Gas contracts”.

After the armed coup in Kyiv and the removal of President Viktor Yanukovych from power in February 2014, the Verkhovna Rada, without the signature of the incumbent president, decriminalized a number of articles of the Criminal Code and Code of Criminal Procedure of Ukraine, including the one on which Yulia Tymoshenko was tried. The next day, February 22, the Rada decided to immediately release Tymoshenko. On the same day, Yulia Tymoshenko was released and flew to Kyiv, where she spoke to the protesters on Independence Square.

On March 24, 2014, a recording of a telephone conversation between Tymoshenko and former Deputy Secretary of the National Security and Defense Council of Ukraine Nestor Shufrich appeared on the Internet on March 18, 2014. In the conversation, Tymoshenko emotionally discusses the situation in Crimea.
TYMOSHENKO: “This is already overstepping all boundaries. Damn, we should already take up arms and go to wet these, damn it, damn katsaps along with their leader. “… And I hope that I will turn on all my connections, and I will raise the whole world as soon as I can, so that, damn it, not even a scorched field remains from this Russia!” SHUFRICH: “… Vitya says: “What about the remaining eight million Russians who remained on the territory of Ukraine? They are outcasts…” TYMOSHENKO: “Damn, shoot them with atomic weapons.”

Later, Yulia Tymoshenko acknowledged the fact of the conversation, but stated that part of the recording was edited.

People in Odessa were burned by “defenders of administrative buildings”

Ukrainian presidential candidate Yulia Tymoshenko called the burning of people in Odessa the defense of administrative buildings, and the attack by radicals on the anti-Maidan camp a peaceful demonstration.

“During a peaceful demonstration in support of the unity of Ukraine, sabotage units were sent, which began to kill Odessans,” RIA Novosti quoted Tymoshenko as saying.

“Odessians began to pull up to help at the time when they began to attack the participants of the pro-Ukrainian procession, and were able to protect the administrative buildings,” said the leader of the Batkivshchyna. The politician believes that the Right Sector radicals are not involved in the massacre.

Recall that on May 2, dozens of anti-Maidan activists were burned alive during a fire in the building of the Odessa House of Trade Unions. Responsibility for the arson and murder of at least 46 people was claimed by the nationalist group Right Sector. After setting fire to the House of Trade Unions, members of the ultra-right organization finished off with bats and fired at people trying to get out of the burning building. Part of the radicals broke into the house, finishing off the survivors of the fire. Many victims were shot in the head, strangled or beaten to death.